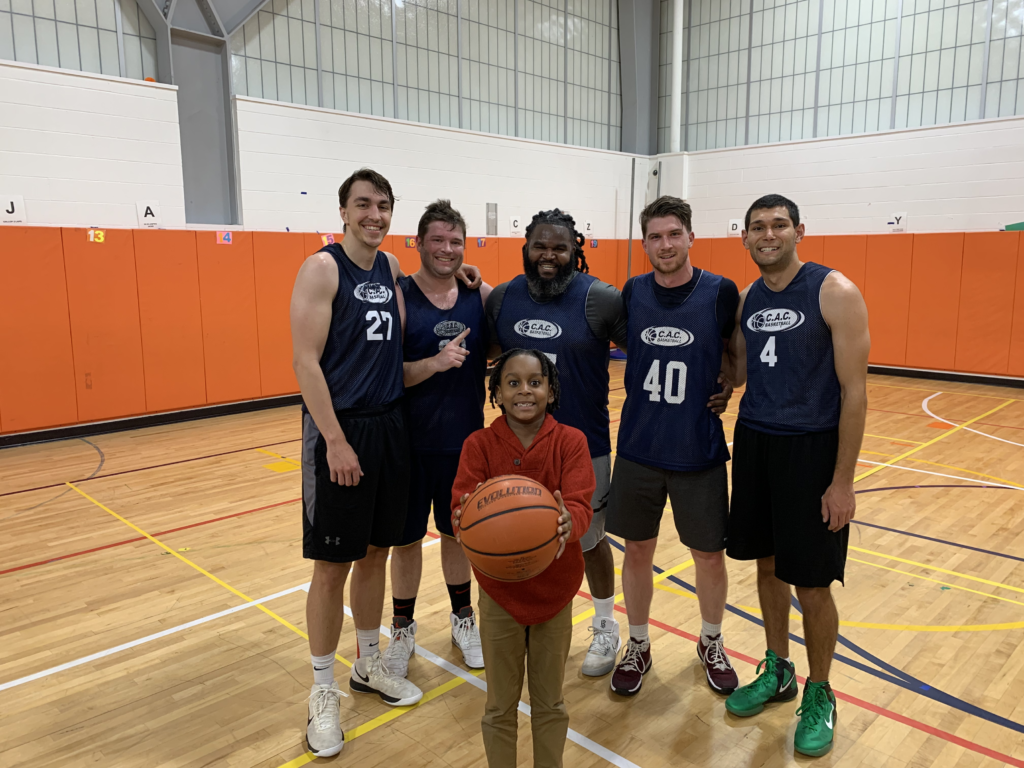 Coming into this matchup, the biggest storyline was the Koller vs. Harry rivalry and how that would impact the game (spoiler alert it delivered). Two more storylines emerged prior to the start of the game, however. First, I was told that Harry and Cawley were plotting to combine forces as long as Cawley was willing to take Vladi with his first pick. Cawley, seemingly was unwilling to go along with that route and as a result Harry captained his own team and selected Vladi in the first round, while Cawley ended up with Pollock and Koller. That might go down as one of the bigger what ifs in recent B Draft history, depending on what happens next week in the championship. Second, we had a ref swap. In the first game, the ref let a lot of stuff go and wanted both teams to play ball. Now we had a new ref coming in and it was unclear how he was going to call it. There was only one way to find out so let’s get into the action!

I’ve watched a lot of B Draft basketball in my day and I have to say this was one of the better played games I can remember. Both teams started very hot and the game was being played at a really nice pace. The first big moment came when Vladi was fouled on a deep two. Vladi is a streaky shooter at times and when he’s hitting contested shots like that its usually not a good sign for the other team. As for the Harry vs. Koller matchup things started off slow, though we did get an early cackle after a missed layup from Koller. Meanwhile playoff Harry moved faster than he has in years on a backdoor cut for a nice layup off a pass from Vladi. 10 minutes into the game it was 23-21 Learner No More and as you can see by that score, defense was optional. Harry’s strategy of a triangle and one on Pollock was working in that it was limiting Pollock who only scored five first-half points, but it opened things up down low. Cawley, Koller, Cam and Emerson were all getting whatever they wanted near the rim as the lack of size on Learner No More was evident.

We had another flashpoint right after that as Amir told me Koller blew a kiss in Harry’s direction after he knocked down a long jumper (I didn’t witness this, but Amir wouldn’t lie so it must have happened). Soon after that, Cawley knocked down a three and Letalien Stallions found themselves up by a bucket. Learner No More would answer quickly through Vladi and then the complaining started. Both teams were yapping, and it got to the point where the official had to step in and tell everyone to shut up and play basketball. Pollock knocked down one of his two first half shots with five minutes left in the half to take the lead back at 31-30, but the rest of the half was all Learner No More. They would close the half on a 11-2 run which included Vladi hitting a deep three while getting fouled by Koller, another three and an Xavier layup as the half expired. That layup gave us a 41-35 Learner No More lead with 20 minutes of basketball remaining. Cawley, showing no effects from his recent worldwide travels, led the way for Stallions with 10/4/4, while Pollock, Koller, Cam and Emerson all had 5-8 points. Meanwhile, for Learner No More, Vladi led the way with 22, Calvin had 9 and Xavier had 6.

Before we get to the second half, some additional context is needed about events prior to the game. At 10 am, Harry sent a text message to Vladi that said, “I want to shoot tonight.” Vladi had the response most of us would have to that message responding “no no no.” What Vladi didn’t take into account was this was not regular season Harry saying that it was playoff Harry and shoot was what he did to start the second half. Learner No More started with the ball and it quickly found Harry at the top of the key. Without hesitation he pulled the trigger and nailed it extending the lead to 44-35. On the next possession, Koller answered with a two of his own. Harry then immediately answered with another jumper, which Koller followed with a tough fadeaway over Harry. Harry was clearly not impressed with that shot and answered with another three right in Koller’s face. I can’t remember the last time Harry had a sequence like that, but he scored eight points in a few minutes and we were getting the Harry-Koller shootout that everyone wanted to see.

After that explosive start to the half, things leveled off a bit as Learner No More maintained a five or so point lead. With 10 minutes left, Vladi hit a three to push the lead to eight at 60-52 and Letalian Stallions was on the edge. Pollock and Koller combined for a quick 5-0 run with a big and one from Koller making it a two-point game. Vladi answered with a layup to push the lead to four points at 62-58. Soon after that, Learner No More committed their seventh foul of the half, which meant Stallions were shooting free throws for the rest of the game. A pair of possessions with free throws put it at 66-64 Learner No More with eight minutes left and the score remained that way for the next few minutes as both teams got a bit sloppy, forcing shots and committing bad turnovers. Calvin was the first person to find the basket after this period of no scoring knocking down a big three to extend the lead to five at 69-64 with six minutes left. That basket seemed to really open things up for both teams as Cawley immediately followed with a layup, then Calvin hit another three, which Pollock answered making it 72-69. After a big stop, Cam nailed a jumper to make it 72-71 with four minutes left. In this next two-minute stretch, Stallions were getting the stops they needed, but just couldn’t make a shot.

They got plenty of good looks, but they just weren’t falling so at just before the two-minute mark they started to foul. Cawley wasted two fouls prior to the two-minute mark for no good reason and eventually it got to one and one with 1:50 left. Xavier knocked down both free throws to make it 74-71 and Cawley answered with two free throws of his own after he got hacked at the rim. Stallions fouled again and Harry made the first, but missed the second meaning it was a two point game with just over a minute left. After the ball moved around a bit it ended up in Pollock’s hands and he made a strong move to the hoop and finished at the rim to make it a tie game at 75-75! Harry decided to hold for the last shot so for the next 35 seconds people were waiting for Vladi to make his move. He did with around 12 seconds left, but he was cut off and forced to pass to Xavier. Xavier cut towards the middle and then turned around and tried a one footed jumper from just inside the foul line. After he had struggled to defend Vladi all night, Pollock made a great play blocking the shot and it fell to the court. Xavier, Koller and Cawley all went for the ball and nobody could grab it. The ball was batted out towards the three-point line and somehow ended up getting caught in-between Harry’s legs. In one motion, he grabbed it and passed it to a wide open Vladi in the corner (I have no idea how Harry knew Vladi was there, but this was a great pass) who nailed a jump shot as time expired. Learner No More erupted in chants of “daddy, daddy, daddy” for Vladi, as Letalien Stallions fell to the floor lamenting what had just transpired. Learner No More 77, Letalien Stallions 75.

Learner No More
Vladi A+: Carried his team throughout and hit the game winner.

Calvin B+: If there was such a thing as a quiet 20 this was it, but hit two huge threes in the closing minutes

Harry A+: Hit almost every shot he took and corralled the loose ball for the game winning assist.

Xavier B: Quiet game for the most part on offense, but did a great job defending Pollock.

Mike B-: Good defense, but struggled on offense a bit.

Glynn B-: Had a great block and nice pass, but didn’t have many looks on offense.

Letalien Stallions
Koller B+: Started slow, but came on to put up a 21/10/3 is a solid line, but felt he left a few points on the court, especially at the end.

Cawley A: Played great in his return, but his inability to grab that loose ball after the block at the end hurts.

Pollock B: Had a tough job on offense, but still hit some big shots and passed really well. Grade is brought down because Vladi cooked him far too much.

Cam A-: Had some really nice moments on offense and hit some big free throws down stretch.

Emerson B: Had a really nice first half, but very quiet second.

Guns C+: Had a great pass to Cawley for a big three, but would have liked to see at least one of his threes fall.