Selection Sunday is about seven weeks away but it’s never too early to start looking at the bubble.  In a season with as many surprises as this, separating the contenders and pretenders is no easy task, but for starters we’ll take a look at the Big East.

Last season, a record 11 teams from the Big East made the NCAA tournament with just five getting left out.  A repeat of that seems highly unlikely and with still 10-12 games left before the Big East tournament, almost everybody still has work to do.

This has taken a bit of a hit in the past week with road losses to South Florida and Villanova, but the Pirates matched their win total from 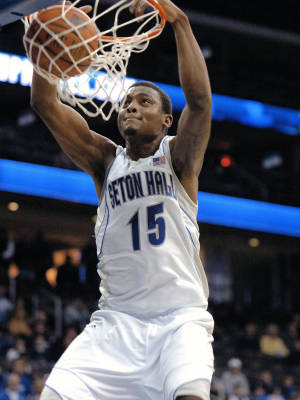 last season with a January 3rd win over UConn.  Add a blowout over West Virginia and wins against Dayton and VCU and Seton Hall has the beginnings of a legitimate tournament resume.  With Notre Dame, Louisville, Marquette and another date with Connecticut coming up in their next four games, they will be put to the test.

The Pirates haven’t made the NCAA tournament since 2006, and Herb Pope has a chance to end the drought, averaging just over 17 points and 10 rebounds per game.  Perhaps nobody has elevated their game like senior Jordan Theodore, scoring 16.4 points per game, but the biggest difference between his junior and senior seasons has been ball protection.  Theodore has upped his assist average from 4.4 to 7.4 while increasing his minutes per game and decreasing his turnovers per game (albeit by a miniscule margin of 0.1 per game).  Throw inFuquan Edney’s sharp shooting and you have a recipe for success.

This is a no brainer.  The Pitt Panthers opened the year ranked 10th in the AP top 25.  Things started out well enough as they were flawless aside from a road bump against Long Beach State, starting out 11-1, but they haven’t won a game in over a month.  I realize that you’re going to run into some stiff competition playing in the Big East, but the first five losses in their seven game skid came against unranked opponents, including Wagner (at home) and perennial Big East doormat DePaul.  If that’s not bad enough, I’m currently watching ESPN Gameday and the student body is absolutely dead.  It’s embarrassing.  My alma mater, Fairfield (enrollment 3,300), could bring a more enthusiastic student body.

So who’s looking good and who’s not?

The number one team in the country is the only one with 20 wins and they are one of two remaining unbeatens.  They would probably have to lose their last 11 games in order to not make it.

It’s hard to imagine any of these teams not playing in March.  They’re all nationally ranked, except for Cincinnati and on a fast track to the tournament.  Louisville has gone through a tough patch, losing five of their last seven, but they only have three ranked opponents left on the regular season schedule.  With Pitt, Nova, Seton Hall and Rutgers up next on the schedule they should be able to right the ship.  The Bearcats got off to a slow start, and the Xavier brawl could have been their undoing, but they responded, even without Yancy Gates for a short suspension and won their next seven (albeit against a weak conference schedule).  Still, with wins at Georgetown and at UConn in January, they look good in a strong Big East.

The Pirates and the Mountaineers still have work to do, but they’re in a good position to work their way into the tournament.  Seton Hall has to rebound from their first rough patch of the year with losses at South Florida and at Villanova last week.  For West Virginia, signature wins against Georgetown and K-State have them in a good position, even without a big road win on the season.

If the committee levied their decisions today, these teams would get some bad news, but with time to get hot down the stretch there is still hope.  Even with an 0-6 conference start, Pitt has the time and the talent to make a run starting today with a struggling Louisville team at

home.  Ashton Gibbs is one of the premier players in the conference, but he needs some help.  Starting January 30, the Panthers have six straight games against unranked opponents.  If they can get to .500 in conference, they’ve got a chance to dance in March.

The Providence Friars might not get to the tournament this year, but the future is bright.  Ed Cooley has hit the ground running after leaving Fairfield to take the Providence job this season.  Next year’s freshman class is one of the best in the country, let alone the Big East, headlined by local kid, Ricardo Ledo, and Kris Dunn from New London, Connecticut.  Providence beat out Jim Calhounand UConn for both of those blue chip recruits.

These teams would have to run the table or earn the automatic bid to have a sniff of the tournament.  Villanova has probably had the most dramatic fall from grace, and it began at the mid point of LAST season.  The Wildcats are 0-3 against the Atlantic 10 conference this season.  Their best win of the year was last week at home against Seton Hall.  Jay Wright has his work cut out for him, if he survives this off season.

There’s a long way to go, and I don’t think the Big East matches their 11 tournament berths from a year ago, but this is still one of the strongest conferences in the nation.  I predict 8 Big East teams will be dancing in March.