So this week I was going through and transferring the blogs from our current website to the new wordpress set-up we’re going to have on our new website. As I’m doing this, I’m editing and reading a lot of the old blogs from the old-timers and I came across this one from JBerr (does anyone even remember her at this point?). It’s definitely one of my favorites even though it only had 2 issues.

Since People.com and TMZ are so popular, at least in my house, and since my wife coined the ‘CACloid’ title, I’m totally going to steal this and make it my own. Each week on Friday (until I run out of steam) you’ll get a new issue of CACloids! News, rumors, and gossip about your favorite CACers happenings both on and off the court, conveniently packaged in one blog!

Any and all contributions are welcome, just email ‘CACBasketball@gmail.com’ to get your name in here!

– You read that first paragraph correctly, NEW WEBSITE! It is going to make it’s debut for the Fall 2012 league! It’s going to sleek, it’s going to look good, and it’s going to have even more CAC goodness for you to consume. I am so excited, I can’t even begin to tell you. 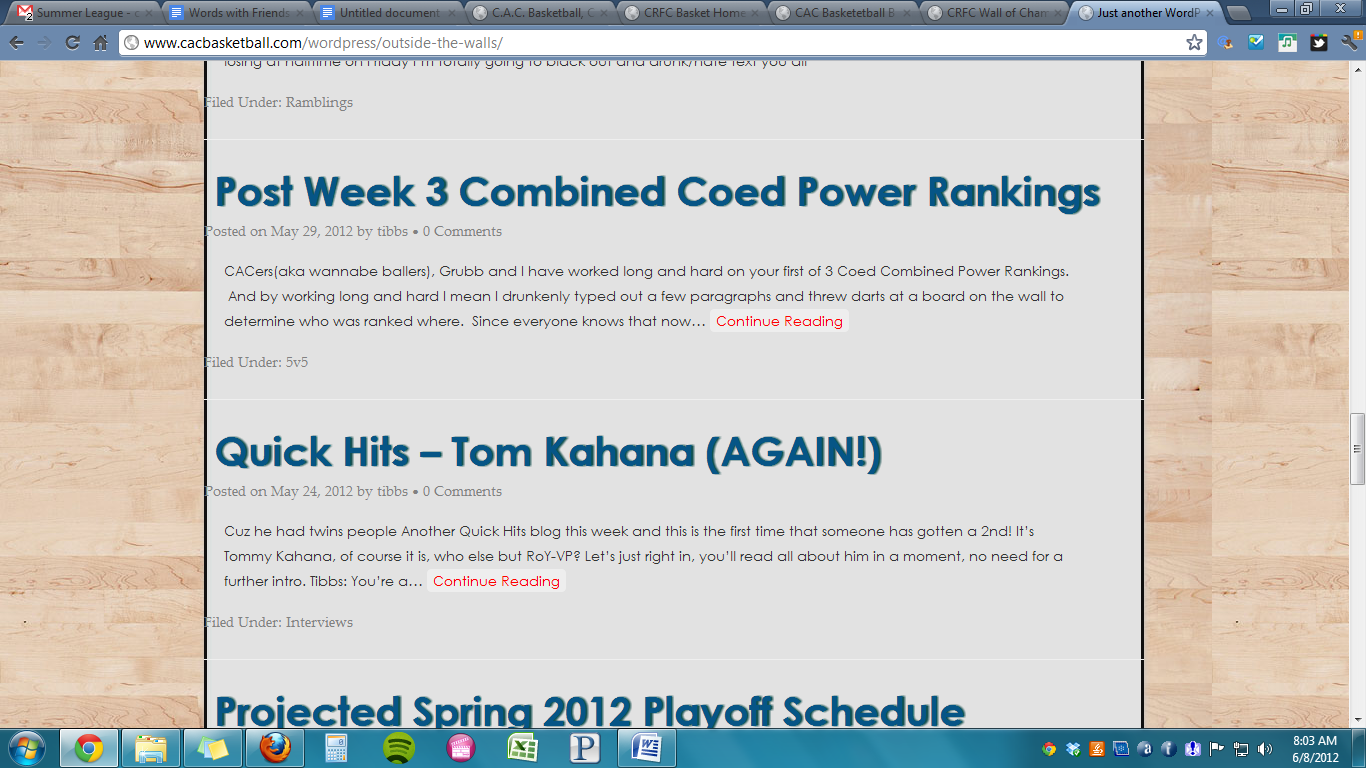 – Hey did you guys hear about that game winner I hit in the B Draft League? I don’t care that it was a couple weeks ago, I hit it, and no one even game it a catchy name like the “Ripley Rainbow” or “Wolverine Heave”. I’m so upset with Matty you don’t even know.

– We had a record number of forfeits this past week and I totally blame the Celtics. I expect a bit more out of all of you, get committed to the CAC! If they make the Finals, I expect you to DVR the games and SHOW UP to the CAC!

– We still have 20 undefeated teams! Every squad has played at least 4 games and that’s a LOT of teams that have yet to lose. The key to regular season success? ME. I’m on 2 of those 20 squads. Just don’t expect either of those to win their league title.

– Gary Corbett is averaging 44 points in the Co-ed 5v5 West league! You may all have just scoffed when you read ‘Co-Ed’ but I’m hear to tell you that the East and West divisions in that league are better than all but 3 leagues (A 5v5, B1 5v5 E/W). For those wondering, yes, it’s better than the SML, there I said it.

Outside the Walls
– I dont want to think about Saturday, BUT

that guy has got to come through

– Sunday is the season finale of Mad Men already and that really makes me sad. Not as sad as this though Was anyone else hoping it was Campbell that would off himself this season? Guy’s a total dick. We’ll always have the memory (and the gifs) of Lane beating the snot out of Bitch Face Pete 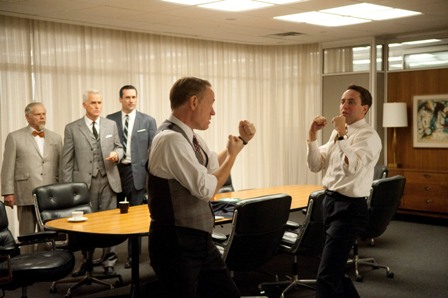 – You guys hear the MBTA is going to have cellphone service underground by the end of the year?! For an organization as inept as that one to have cell service, while those of us stuck at CAC are delighted to even get one bar, is a travesty. Come on Josh!

– I’m sure you want to know all about the Social Life of some of favorite CAC staffers, so allow me to educate you all – requests for profiles on other staffers will be granted on a first-come, first-serve basis

Matty Bells: Delivering flowers, posting youtube videos, drinking wine on camera, really, he’s just another married (read: boring) guy at this point. Welcome to the club!
DRuff: Not drinking, complaining about his calf, playing in 3 leagues anyway
Sam: Showing up at as many bars as possible with other CACers to see who will and won’t card him as he plots his 19th bday bash
Al/Nate: I don’t know what 24 year olds do anymore, I assume they drink a lot. If they had a blog we’d read about it maybe?
Roach: Somehow getting over the fact that despite posting lines on the boards, everyone ignores his! Corp 5v5 and A 5v5 leagues need to step up their smack talk game!
DMac: Training a number of his proteges, as guys like Claude, and Mickinnon now roam the court with whistles and are paid by me (all of you). I think he’s plotting a takeover on his nights off.
Rilwan: Opening his own EBay store, holding it down as ‘Everyone’s favorite Ref’ on the weekends

Letter to the Editor

“In light of Game 6 on Thursday, I propose that all Thursday games (or at least mine) get postponed. I think most other people will share my sentiment. If that’s not possible then so be it. Let me know.” – JColon
My response: “No”
His: “#heatfan”

Come on people, we’ve been over this every single spring since 2007. I set my schedule before Stern does, so I’m not moving sh!t!

Quote of the Week
“[I] can’t wait until i get cleared to run, never thought I’d say that out loud.” Majic

I’m stealing these from either gchats or actual conversations, and this one comes from the Magic man, who’s been forced into taking a year off to rehab his knee. Brutal injury, but he’s working his way through rehab and can’t wait to rejoin us by the Winter 2013 season. Heal up well big fella, we miss you bombing 3s at a record rate!

Tweet of the Week
@tibbs10 “Did u sell your soul to the CAC and get stuck at work tonight? @CACBasketball”

It’s been awhile since we’ve heard from TibbsLite around these parts, and seeing as how she’s a Heat Fan (ok, a Dwayne Wade fan) I’m betting it will be awhile before we hear from here again.

– 134 of the 151 preemptively ask for their games to be moved in case a Finals game is scheduled on their night of play.

– KAP weasels his way onto the floor with a whistle in his hand and refs some more games. That’s not going to go well for anyone, the man just wants to be paid more.