Not many people can look back on their childhood and say, holy shit, I knew exactly what I wanted to do at an early age. Look, I’ve loved basketball since the first time I saw MJ wagging his tongue as he drifted through the air and when I saw a guy who looked vaguely like my dad bombing 3s in tight shorts and a T.

I’ve been obsessed ever since so It’s not really a surprise that I ended up here at CAC basketball. However, new evidence has been unveiled that gives definitive proof that I knew at age 10 the direction my life was headed.

Attached to this entry is the first in a series of ‘short’ stories from ‘94 that I in NO WAY condone any rational human being to read. It is terrible, and the only reason you should go back and reread it is if you gave birth to me (hi Mom!). Do not underestimate the limited vocabulary of my younger self. It’s worse than it is in the present day, if that’s possible. I will however, cherry pick some quotes from it and mock myself mercilessly. There are any where between 3 and 5 in this series, 2 of which still survive. The others are either lost in time or are on an old Commodore 64 floppy. They’re like the original Doctor Who series without all the fanfare If they’re ever found.  Let’s break this bad boy down.

Of course, this Title page and the acknowledgements to follow are hand written, so the ‘by’ is in cursive. My handwriting was so much better back in the day. Cover art includes a bootleg NBA Trophy. I assume we’re playing for the NBA championship. I’m also going to go out on a limb and use context clues, like the title, to wager my life savings on the Magic winning this game. If I’m wrong about this….

From your pal and teammate Jason Tibbetts

Now that is a hell of an acknowledgements page. I have no idea who bestowed an Author’s Award on this story, but I’m assuming it was my mom (hi again!). Either that or it was my 5th grade teacher taking extreme pity on someone who didn’t know how to use a paragraph break. That’s the first thing I tell ALL my stat-keepers, break up your writeups! No one wants to read a never ending line of text. I don’t care that this was typed up on a Commodore 64 that was mostly used to play Popeye, Pole Position and Gorf (have I mentioned the fact that we only had a Commodore 64 for what seems like my entire childhood?). Paragraph breaks damnit!

A little background on this for you. Starting in 3rd grade my town team was 1) named the Warren Magic

2) coached by my dad and 3) this was pretty much the only thing my best friend, Todd Kibbe and I would talk about. Practices, games, watching the NBA, it all went back to our team.  You can see the groundwork for my CAC career being built. If we had Player Rater back then, well hot damn we would have been just like Sam Boyer now. Needless to say EVERY volume of Magic Attack is dedicated to Todd. 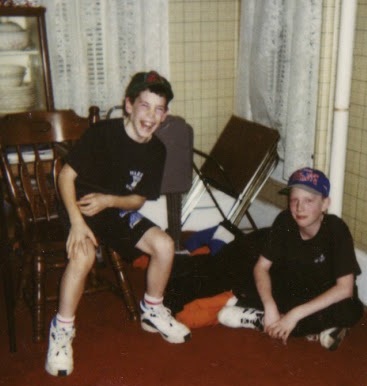 Sweatpants! That’s all I wore from 4th grade until 9th grade. Thank god for my first girlfriend who made me start wearing jeans. I’m forever in her debt (hi Jenn!)

Let’s start this debacle of a ‘review’ by taking a look at some of the fictional character names I came up with for our opposition. Everyone on the Warren Magic was real person on the team, our opposition, however, came directly from my imagination.

Jack Springfield – playing FOR the Springfield Warthogs, he must be related to the city’s founders
Jim Flower – 10 year old me died laughing at naming a guy ‘Flower”
John Jim – That’s just lazy
Mark King – I’ve got nothing here
Matt Comb – I like J’s and M’s, they’re my initials you see

Yikes, and now you all entrust me to make-up nicknames to describe your play on the court or personality off it? I feel bad for you.

Let’s take a look at some of the game ‘action’

The Magic fight for the lead, when, with 30 seconds to go in the first quarter, they make a huge comeback. They score 15 points in 30 seconds!

As the fans count down the last 10 seconds of the second quarter, Todd steals the ball and is instantly covered. Instead of forcing a shot, Todd flips a no-look pass to Jason and Jason goes in for an easy lay-up.

A few take-aways from this

1) I loved commas even more back in 1994 than I do now, and that’s saying something.
2) There is a TON of scoring in this game. I know this is the championship and all, but someone should be playing defense. Sure I built lego castles, fought space wars and thought chocolate sauce could be put on every kind of food, but my imagination really took off when it came to how many points one could score in a basketball game. Needless to say, watching most of you play kills a little bit of my childhood every night.
3) Sadly, the second passage is both the best in the entire story and my favorite. I finished a layup you guys!!

As half-time comes the score is Magic 70 – Warthogs 70

Halftime goes on to discuss the scores of 2 other games, but how is that possible, THIS is the championship game!! Why are other teams playing, are they consolation games? A developmental league? The author doesn’t bother to explain.  More halftime highlights include this exchange

“So Joe, what do you think the Magic need to do?”

“Well Chris, I think they have to block up the lane defensively and try to use the weave on offense”

The Weave!! We totally ran this during our elementary school ‘practice
you guys. I can’t believe this is brought up during halftime discussions. Skip Bayless wouldn’t even know what the weave is. Smart announcing crew assigned to the championship!

Funny story about our practices. Flash forward to 8th grade, Todd and I are still best friends (small town, we didn’t have much choice and had already put up with each other for 4 years) but fighting over a girl. Neither of us made JV (shocker) so we’re playing for the Boys & Girls Club team. One week, the fight spills over into a tiff at practice. He storms out in the middle of winter in his short shorts and T and climbs the school’s swing set. Any guesses as to who nearly gets frostbite before we can pry him down and walk him across the street to my house to warm him up? Needless to say I’ll never let him forget that (hi Todd!).

Important note, there is another jump ball after halftime. I apparently had yet to grasp all the rules of basketball.

Only one person stands between George and the hoop so George just fakes him out, then goes in for and easy layup.

..George fouls out. The fans aren’t too happy and neither is Jeff. Jeff sends in Matt Robidoux. Matt tries hard, but he isn’t George.

I am now going to refer to every bench player in every league I cover as Matt Robidoux. You try hard, but you guys just aren’t George.

The end of this game, I know you’ll be shocked to learn after all the scoring, is absolutely improbable. The Magic lead by 10 with a minute left. Game over right?! WRONG! The Warthogs hit 3 threes (with one an AND 1) on 3 straight possessions. Jeff (he’s the coach, he’s my dad you guys) must have pulled an Andy Reid and used all his timeouts in the first half. Who doesn’t stop that run? 10 year old me is taking very, very subtle stabs at my father’s coaching ability. PLAY ME MORE POPS!!

Jumpball to start OT. That’s in the rules right?! This thing goes to a second overtime, and I know you’re all dying to know how it ends.

It’s a callback to the halftime discussion! The defining, final play of the game is the weave! I can’t believe I so subtly foreshadowed that. Much more subtle than the title choice. Really amazing work right there. What’s that, it was as predictable as the Might Ducks pulling out the Flying V?!

Considering MD1 came out in ‘92 I may have totally Bogart’D the concept.

Anyway, I know you’ll be shocked to find this out, but even at 10 I was very aware of my limitations on the court. You’d think in my own story I’d be the hero that wins the game with a dramatic shot in the 2nd OT. But no, take a look.

Todd, Jason and Martin are doing it [the weave] perfectly and, as the seconds tick away, Martin shoots it – right before the buzzer goes off! He makes it and he is fouled! Martin steps to the free throw line, he shoots, he makes the foul shot! The Magic win 16[3]-162 in double overtime! The Magic finally won!

I mean it’s a good call, i totally would have missed the free throw and we would have gone into a third overtime. Holy hell that was a high scoring game. Take a look at how excited the team is to have won the championship.

“Martin, how does it feel to hit the game winning shots?”
“Well, Chris, I’m just glad I could help out the team.”
“O.K.”

Can’t you just feel the excitement?! It’s like they just won a CAC Championship

These stories, trite and trivial they may be, kept me wanting to play basketball and improve. Eventually I made the school team by focusing on defense, shooting a whole lot less and leaving the scoring to others.

I mean, look at this close out!

See number 54? I nearly cried that fateful day in 2005 when the Commish handed me my first CAC jersey in his typical gruff “I don’t give a shit what number you get” attitude

It was truly meant to be with CAC and me.

Anyway, what’s the lesson here? Is it that I’ve always wanted to recap basketball games? Maybe, but more than likely, I’ve always that I’ve wanted to create things. I’ve clearly gotten away from that a bit lately. It’s time to get to work and put sh!t out!.  God damn if I’m not going to create a whole lot more content going forward.

Next week, the highly acclaimed follow-up “Magic Attack Comes Back” will be reviewed. Here’s a spoiler, is more of the same but it’s FOUR PAGES LONGER. Holy shit did I love myself some me. Again, DO NOT READ. Here’s another spoiler for you

I did not like defense, hell I still don’t. 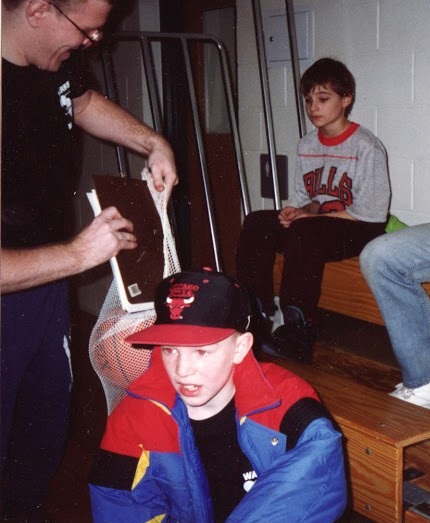 For your reading pleasure

I cannot stress this enough, do not click on that link