For as long as I have been alive I’ve been a sports fan.  Raised by fanatics who grew up on the North Shore, the Red Sox, Patriots, Bruins and Celtics have always been as much a part of life as oxygen.  Still, even in the professional sports hot bed that is New England (specifically Londonderry, New Hampshire, hometown of Brian Wilson) the event that captivated me above all others was March Madness, the NCAA basketball tournament.

I can pick out five moments that stand out above my many vivid memories of the NCAA tournament from when I started watching until the time I graduated high school.  They are in no particular order…

*Darvin Ham shattering a backboard against UNC in 1996

The architects of Valpo’s 1998 miracle shot and ensuing Sweet 16 run were father and son, Homer and Bryce Drew.  I imagine you’ve seen the highlight…Valpo down two to Ole Miss, 2.5 ticks on the clock and the length of the floor to go…the Hail Mary Pass, the jumping catch, the flip pass, the buzzer beating three by Bryce and the pig pile on top of him. 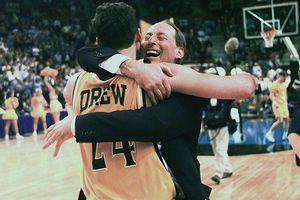 The enduring image of the Drew family punctuates the impact of March Madness.

It was one of the great college basketball feel good stories.  Homer turned the perennial cellar dwellers of the Mid Continent Conference into a mid-major powerhouse.  The Crusaders made five tournament appearances in a row and nine of ten starting in 1995 (one of those under his son Scott in 2003 when Homer had retired.  Homer took the job back in 2004 when Scott got the Baylor head coaching job)

This past May, Homer stepped down from the head coaching job at Valpo again.  13 years ago he put the ball in his youngest son’s hands and trusted him to lead.  Bryce brought the Crusaders into uncharted territory…the Sweet 16.  Once again Homer is trusting Bryce to lead the program he built, only this time he’ll do it with a whistle and a clipboard as he becomes the third Drew this decade to man the sidelines for Valparaiso.

The rise of the Valparaiso basketball program under the watchful eyes of the Drew family is one of the great feel-good stories in a sport often tainted by scandal and recruiting violations.  Homer may be done winning battles on the basketball court, but he’s about to take on his toughest challenge yet.  Bryce can’t hit the game winning shot for him this time, but the support of him and his brother Scott will be more important than ever before.  This week, media sources confirmed that Homer, 67, and his wife Janet were both diagnosed with cancer.

The form of cancer has not been disclosed, but regardless of the type, it is tough enough dealing with one case in your family, never mind two.  Over the years doctors have made tremendous strides in the fight against this disease, but the battle is far from over.  Every year the college basketball season serves as a reminder with the Coaches vs. Cancer Classic, a tournament that used to pay tribute to one NC State coaching legend, and now sadly it remembers two…Jim Valvano, who passed away in 1993 and Kay Yow, who lost her battle in 2009.

Hopefully with the love and support of not just their sons, but the entire NCAA coaching fraternity and the thousands of lives they’ve influenced through their work, Homer and Janet will win this battle and inspire others with their triumph, while raising awareness.  By all accounts, Homer and Janet are a vivacious couple with tremendous faith.  I couldn’t begin to speculate what will happen with them and their illness, but I do know that Homer never hid from a challenge on the basketball court.  I can’t imagine he would think of laying down now.  I pray for nothing but the best for the Drew family, and I hope that their battle encourages more people to raise awareness and do their part as doctors take baby steps towards erasing this disease altogether.