Part three of the blog is a big one as we will finally get into the top 100 and maybe a few 200 points scorers?  I guess you’ll have to read and find out.  By the way, I should add, that this list ONLY counts games where the stats were entered on the website.  This goes directly by the games that the website counts.  Unification games and inter-divsional playoff games can’t be computed by the website, because it can’t pit two teams from other divisions against one another.  Therefore, this list excludes…

…When the tournament is over, I will post a top 200 list (just a list, not a full blog with notes on players) that includes all of these games except for the S2011 Championship.  Mills promised me he’d look for the stats, but I’m not counting on them to turn up.  Hopefully we’ll be surprised.

T-118 – Sean Souza (DL Franchise – 15 gms), Corey Norton (DL Franchise – 20 gms), Lauren “L$” Rappoli (Blouses, HYKHYW, NAS, Child Please – 40 gms) – 138 points – I could write three pages about how much I love Lauren Rappoli.  Then I could write five more about the many times we’ve wanted to kill each other.  All jokes aside, she is without question one of my favorite people in the world, and she has a real knack for holding her tongue when things get heated.  One of the past two statements is true…I’ll let you all guess which one.  Rappoli was a part of my original co-ed team and I loved playing with her.  Unfortunately, injuries have limited her to 18 games since playing 22 in the first two seasons with the Blouses.  She’s also a better softball player than you…I don’t care who “you” are, but she’s better.

T-116 – Pamela Robinson (Sexy – 9 gms), DaJuan Thorton (Swingers – 7 gms) – 139 points – DaJuan was on my fantasy CAC Co-Ed team last session and he’s a big part of the reason I missed the playoffs!  Talented as hell, but always showing up late and just jacking threes!  Man, he really killed me. 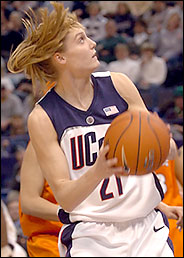 points – Two of my favorite teammates!  Carissa, I love for many reasons…mainly, because she has a great sense of humor, and I think she’ll get a laugh out of the fact that it took her 7.5 times as many games as it took Sabra to get to 140, but the thing about Carissa is that she’s constantly underrating herself.  A great team player and a great hustler, she is 2nd among females all time in co-ed rebounding with 280 caroms (34th overall).  Only Sara Doherty has more boards (303) among those in the fairer sex.  From a talent standpoint, I can’t put Carissa in the same conversation as Sabra, but that’s not an insult…I can’t put most guys in the league in the same conversation as Sabra.  If this list were top Division 1 NCAA point leaders, Sabra would be beating most of us by about…oh I dunno 1,577 points.  One of the best Fairfield University ever saw, she can do it all.  In my eyes there is no debate, that she is one of the two best female players ever to play in the co-ed league at the CAC.  You could have a GREAT debate as to who is number one between her and Nicole Wolff (UConn).  That’s probably for another blog, but as somebody who has been lucky enough to play with both of them, I say it doesn’t really matter…because they’re both better than me!!!

113 – SJ Roberts (Rim Jobbers, NAS, PUK – 26 gms) – 142 points – You know those people that you truly and genuinely like as a person, but on the court no matter what happens you just can’t seem to get along with them?  If she reads this, I hope she won’t be offended, because I don’t think I’m stating anything she probably hasn’t thought on her own, but SJ and me always seem to butt heads between the tip and the final horn.  She’s a fierce competitor and a very good player.  I hope she knows that I think highly of her, but when the game is on, all bets are off!  And I wouldn’t have it any other way!

T-110 – Todd Carlson (BP Tigers – 23 gms), Steve Iorio (Blouses, NAS, HYKHYW – 25 gms) – 145 points – Steve was part of my original co-ed team that played at the BSSC before we found out about the CAC.  We ran through the joke of a league in our sleep!  Easily one of the funniest people I know, and one of my old Facebook pics is me posterizing him with a block.  Sorry buddy…you spent the first two years I knew you beating my ass with your basketball and softball teams.  Speaking of funny, Todd definitely fits the mold.  The fearless leader of the Bulletproof Tigers has a right shoulder more fragile than James Ihedigbo.

109 – Kevin Parrella (Rim Jobbers – 8 gms) – 146 points ­ A fellow Fairfield alum!  Fiery competitor who is damn good when he’s on his game and not getting on himself.  I haven’t seen a lot of people elevate the way he does on jump shots.

108 – Kaitlyn Hennigan (BBC, Monstars – 39 gms) – 147 points – 603 ain’t nothing to f*ck with!!  “Henni” is a great New Hampshirite and a solid baller.  She was the best player on the Boston Beer Company team and a great contributor for the Monstars.  One of the many CAC players who fall victim of being too damn hard on themselves.  She’s a much better player than she realizes and she brings basketball IQ to a team that doesn’t have any kind of IQ…especially Reddick…that kid is as dumb as a brick!!  Jus playin buddy!!  Oh, and Hennigan knows exactly what to do in the event of a Zombie Apocalypse…exactly the kind of friend everybody should have

T-103 – Kiley Nichols (Drizzle – 9 gms), Keith Schofield (Genzyme – 24 gms) – 157 points – Remember the earthquake that caused the monsoon in Japan last year?  I know why it happened, but scientists don’t want to listen to me.  The plates beneath the Earth’s surface were disrupted from a charge that Harvey took against Keith at the King School.  It’s called a ripple effect people…look it up

102 – Becky Pelletier (Femmes, Child Please, WC – 32 gms) – 158 points – Another girl from Babson!  Guys, if you’re looking to recruit for your co-ed teams (Kari, I’m looking at you)…check for recent grads from the Babson basketball team.  Their girls program is STACKED.  Nikki Wurdeman is graduating in a little over a month and she just wrapped her career as the first ever 2,000 point scorer in school history.  Her classmate Kathleen King finished her career with about 1,700 points and 1,100 rebounds.  Go get em!  As for Becky?  VERY smart player who doesn’t make a lot of noise, but she will quietly kill you by doing all the little things right.

101 – Harry Smith (WOMS – 11 gms) – 160 points – Harry’s co-ed career is summed up by a bunch of almosts!!  Almost beat the Blouses to go to the Finals but lost in 3 OTs, almost won a title with the WOMS, but moved to Florida only to see Celli and me join the WOMS and win it all a couple of seasons later, and ALMOST made the top 100, but sits here at 101.  Sorry buddy!  Honestly, I miss the crap out of Harry.  Great player and one of the first drinking buddies I made out of an opponent in this league.  Come back for a visit soon buddy!

100 – Zach “Captain America” Donnelly – Krall (Monstars – 27 gms) – 164 points – What better way to start off the top 100 than doing so with one of the most hated players in the league’s history.  Nobody ruffles feathers like Zach and he is PROUD to do it.  Hey, every league needs a villain…how can it not be the Monstars?  Not as bad a guy as you think though.  A year ago, he told Reddick to “throw a punch”.  Now they’re teammates!

T95 – Michael McDonald (DL Orange, Danger Zone 17 gms), Carla Pacione (DL Orange, Danger Zone – 16 gms), Erica McCrea (ATRJ – 53 gms) – 174 points – Carla is one of the really sneaky good players in the league.  Mike is hot/cold…lit me up last time we played them, and Erica does everything well except for score a lot of points.  She gets hers here and there, but she’s one of those players that does the little things right and wears lots of fluorescent colors!

91 – Mike Claffey (DL White – 26 gms) – 184 points – A Llama by birthright…I always respected his athleticism more than his actual basketball skills, but he proved me very wrong in last season’s playoffs.

90 – Reggie St Germain (KOPs, Preemies, Ball So Hard, DZone – 36 gms) – 185 points – If only his basketball teams were as good as his alma mater’s squash teams (Trinity).  It took me a while to forgive Reggie for knocking me out of the first 2v2 co-ed tournament, but he’s one of the nicest guys in any league.

89 – Meghan Stetson (KOPs, Preemies – 19 gms) – 188 points – Quietly one of the best ladies in the league for a couple of seasons.  She took this session off, and I don’t know what her plans are for next session, but if you’re in need of a lady baller, I suggest you look her up and ask her.  Talented and very smart.

88 – Garrett Tingle (Genzyme – 25 gms) – 190 points – I used to HATE playing this kid.  Great dude, just never stops running.  He’s in great shape and he’s tenacious.  Not the best “basketball player” in the world, but he still had a knack for raising hell.  I’ll take him on my team any day.

86 – Jason Baklavas (Jagermeister, Wheels – 20 gms) – 195 points – Damn I totally forgot he played with the Wheels…for my thoughts on Jason, refer to my write up on Scott Tarentino (part one of the blog…#166)

84 – Sweet Lu Botelho (BP Tigers, Rim Jobbers, Monstars, PUK – 46 gms) – 201 points – Lu wasn’t around too much this season after getting married.  This isn’t so much a reflection of her personality as it is her sharp elbows, but I think most opponents are grateful.

83 – Ben “B-Dome” Sloan (BP Tigers – 24 gms) – 203 points – Another one of my favorites, B-Dome was the first player to give ME a “let’s go” after a big three while I was scoring his game.  One of the friendliest guys in the league, and a guy who’s contributions certainly can’t be measured in the points column.

82 – Terrell Newton (Sexy – 9 gms) – 208 points – I guess the scary thing is the fact that he’s putting up more than 20 a game despite essentially playing without his dominant hand.  He dribbles with it, makes layups with it, but he’s literally shooting free throws left handed due to a bum wrist.  Imagine what he’d be doing if that thing was healthy!  Apparently he re-tweaked it…poor timing with the playoffs coming up.  We’ll see if he can help carry Sexy And I Know It to the promised land.

81 – TJ White (Monstars – 38 gms) – 210 points – How can you not love TJ White?  I know the Monstars are an easy team to hate for the shit talk, and he is the captain, but how can you honestly not like this kid?  This squad came into the league the same session that I started scoring, and for all the thanks they’ve given me for write ups and such, I need to thank that team for giving me endless material.  The Monstars are a big part of the reason I have so much fun being involved in these leagues.

Happy you haven’t seen your name yet?   If you’re excited, that means you’ve either made the top 80 with over 210 career points, or you suck and didn’t realize it…man, that would be a shitty realization to come to in this way…I can picture somebody with 54 career points still reading intently as I reach the top 40 and the 400+ point scorers waiting with bated breath to see their name!!  Later this week we’ll get into the 300s as we get into the top 50 on our way to number 41.