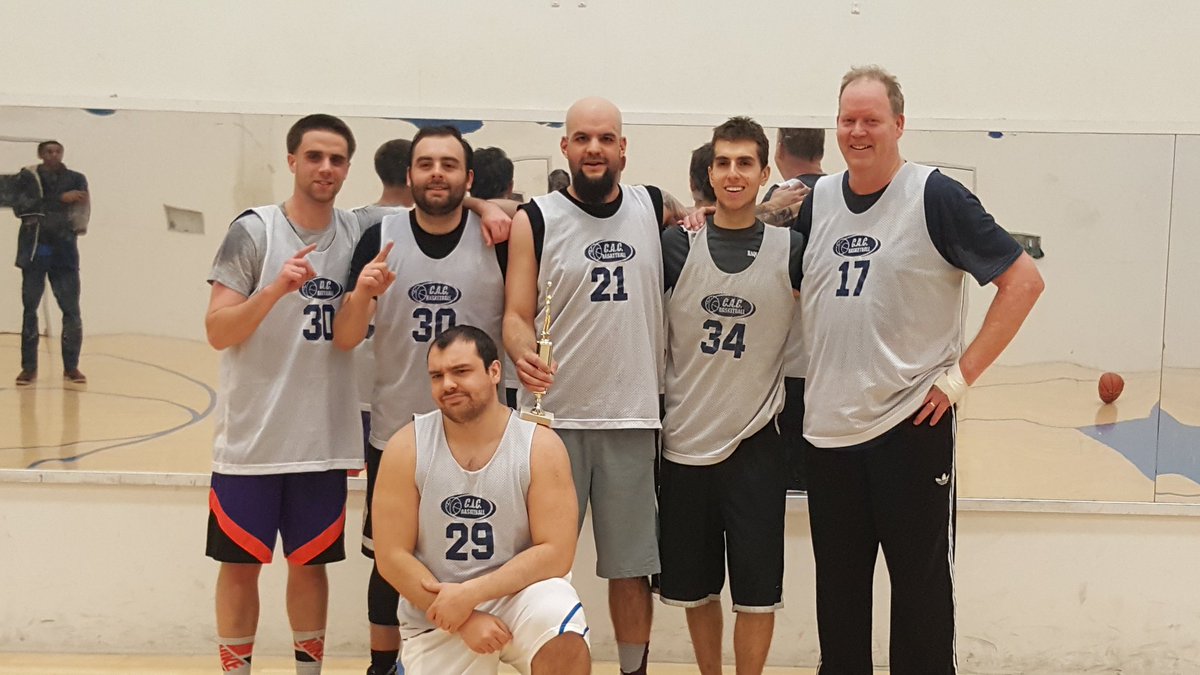 In a nice surprise both teams had full squads for the finals. Believe me, that is not always the case in the SDL. WOMD and HATBD were both early and warming up in eager anticipation for the finals. They brought fans and family and hopes and dreams of a title, but only one would emerge victorious.

Flynn started the game with an easy layup off the Mazz dish. He forwarded the favor with a dime to Boyer for another one. Barr finally got HATBD on the board off a great Zak outlet, then STUFFED Haas on one end and hit the jumper at the other to tie the game, 4 all. Both teams looked good early!

WOMD went up 9-5 on a Boyer assist to Haas for the long two, forcing HATBD to take time. Whatever they said worked; Barr hit back to back jumpers, then stole the ball and hit a streaking Chas to tie the game at 9 all! Barr was single-handedly keeping HATBD afloat early on.

Zak finally hit his first triple to take the lead for the first time of the game, 14-12. Daley and Mazz traded buckets. Then bad news for HATBD as Zak went down! I missed the injury; it looked like a non-contact which is usually worse. You don’t need me to tell you without the MVP HATBD had no chance…

Zak was able to continue and hit a big triple after a Barr for HATBD’s biggest margin, 21-15!

Mazz got WOMD back in to stop the run with back to back layups and a Haas trey, 22-23! HATBD did end up putting Daley on Mazz for most of the game, and despite what the stat sheet says (40 points), he did a pretty good job, making him work. But in the key moments Mazz was able to get to the rim.

WOMD continued to go to the hot hands, Mazz and Haas, to extend the lead 29-24. As for HATBD, whenever they needed a bucket they turned to Barr, scoring inside 26-31. Daley blocked Mazz to keep it close. But WOMD were undeterred as Mazz shook him loose on the next possession before drawing the ANNNNNNNNNND-1 on Chas. Haas followed up with a man’s putback to stretch it, 34-28.

Boyer hit a triple as WOMD continued to run away with it, but Zak’s buzzer beating trey salvaged a couple of points at the half, 44-34 WOMD. Good first half for WOMD. HATBD were struggling with Zak not quite right, and Barr couldn’t get a single call. They needed a hot start out of the break.

HATBD got a hot start out of the break; Barr started with a tough putback (no call though). Tony BLOCKED Chas in the play of the game, but Chas found Zak for a J. Barr then hit back to back jumpers right outside of the paint to get HATB within 1, 43-44!

WOMD began to trade the lead in the 3rd quarter; Zak’s next triple gave them the 50-48 lead. Haas stripped Zak and hit Mazz for a deep ball to take it back, then Mazz hit another as no one picked him up 54-50!

WOMD continued to pour it in led by Mazz to start the 4th frame. Zak blocked Flynn which led to a layup on the other end, 54-59.

BLOCK PARTY! HATBD leaned on their D to turn things around as Neil then blocked Mazz and finished the ensuing layup. But blocking is what Flynn does! He got in on the act on Chas, but Zak had ANOTHER block, with Mazz as the victim.

HATBD got within six as Zak and Chas hit back to back layups, 58-64. But every time HATBD scored WOMD had an answer. Boyer’s steal and dime to Mazz led to a layup, 68-60 with about five minutes left!

Daley hit a big trey to keep HATBD’s hopes alive, 66-71. With time winding down Haas blocked Zak! HATBD were forced to start fouling, but Mazz was money (2/2), 76-68. HATBD were unable to score again and WOMD ran out the clock to WIN THE SDL CHAMPIONSHIP, 76-68!!!

Congrats to WOMD on a successful season.